• I-94 is closed from Michigan City, just across the border in Indiana, to the Illinois state line. "If you're driving to Chicago you won't make it."

• An Amtrak train west of Kalamazoo has stalled near Niles for over seven hours. Brake line froze. They've tried to thaw it, but it didn't go. An eastbound train stopped and took anyone who wanted to return to Kalamazoo, and left some drinking water. A passenger on the phone to the TV station said they were waiting for the next westbound Amtrak train and they would combine, then proceed to Chicago.

• Kalamazoo started the day with 5-5½" of new snow. Places in West Michigan were getting a foot to a foot and a half during the day and overnight.

• A band of heavy lake effect has established itself down the length of Lake Michigan. It is slowly moving east, intersecting the coast along the southwest corner of Michigan. Expecting an inch or more per hour.

• Monday will see another 3-6" west of US-131, the main road between Grand Rapids and Kalamazoo. But the winds will be picking up. Gusts of 35mph will produce drifts, and with the much colder air behind the front, severe wind chills. Tuesday will see a high maybe of 0°F, and be sub-zero all day.

However, it will be 35°F and raining by the weekend.

• CNN is showing a movie tonight -- huh? -- March of the Penguins. Is CNN trying to tell us something? Or have they just run out of news or money to pay anyone to read the news?

What Does It Mean?

It is easy to read too much in this, other than taking more care and keeping up with the results.

Weather is not climate. One storm, or even a series of cold, snowy, icy storms, does not mean global cooling. At least not by themselves. Remember, global climate studies involve science. And science dictates that we study as many variables as we can and couch results in predictions and uncertainties.

Global cooling? A new ice age? Puh-lease, just last week the heat pump was running and we've got the system to switch from the LP furnace to the electric heat pump at 42°F. And by the weekend we'll have rain. Yeah, it'll be damned cold, but it does that sometimes around here. And unlike International Falls MN which gets really, really cold, or the U.P. where we could go two weeks with temps below zero, the extreme stuff doesn't tend to last around here.

What we do get is a lot more ice. And that's why we own 4WD and AWD vehicles here and never did in the U.P.

Too much weather news for you, especially when conditions are, as usual, much worse elsewhere? Remember that part of the purpose of this blog is for me. To remember. To compare. Sorry.

From BMJ, The survival time of chocolates on hospital wards: covert observational study.

Abstract
Objective To quantify the consumption of chocolates in a hospital ward environment.

Setting Four wards at three hospitals (where the authors worked) within the United Kingdom.

Participants Boxes of Quality Street (Nestlé) and Roses (Cadbury) on the ward and anyone eating these chocolates.

Intervention Observers covertly placed two 350 g boxes of Quality Street and Roses chocolates on each ward (eight boxes were used in the study containing a total of 258 individual chocolates). These boxes were kept under continuous covert surveillance, with the time recorded when each chocolate was eaten.

Results 191 out of 258 (74%) chocolates were observed being eaten. The mean total observation period was 254 minutes (95% confidence interval 179 to 329). The median survival time of a chocolate was 51 minutes (39 to 63). The model of chocolate consumption was non-linear, with an initial rapid rate of consumption that slowed with time. An exponential decay model best fitted these findings (model R2=0.844, P<0.001), with a survival half life (time taken for 50% of the chocolates to be eaten) of 99 minutes. The mean time taken to open a box of chocolates from first appearance on the ward was 12 minutes (95% confidence interval 0 to 24). Quality Street chocolates survived longer than Roses chocolates (hazard ratio for survival of Roses v Quality Street 0.70, 95% confidence interval 0.53 to 0.93, P=0.014). The highest percentages of chocolates were consumed by healthcare assistants (28%) and nurses (28%), followed by doctors (15%).

Conclusions From our observational study, chocolate survival in a hospital ward was relatively short, and was modelled well by an exponential decay model. Roses chocolates were preferentially consumed to Quality Street chocolates in a ward setting. Chocolates were consumed primarily by healthcare assistants and nurses, followed by doctors. Further practical studies are needed.

This summer at several West Michigan health care facilities we conducted our own research. A blue tray with three shallow compartments was periodically filled with individually wrapped chocolates and placed at the nurses station. By removing the barrier of a closed box or bag, we found consumption rates greatly accelerated. All three shifts were evaluated, both during the week and on weekends.

Surprisingly, based on reporting from the aides, the longest survival times were during third shift, provided that the chocolates were placed AFTER the overlap with second shift. Otherwise the chocolates experienced a mass extinction event. The best explanations for the third shift results are: (1) third shift aides brought their own snacks and (2) they frequently didn't have time to stand around the nurses station. One would think that things would quiet down in the wee hours, but the middle of the night often is when patients need the most care. Also, second shift experiments had the shortest half-life and lifetime results.

Nurses seemed to consume the least, though doctors reporting on the floor was negligible -- too low to count. Selected aides were shown where the bags of chocolates were kept, For Emergency Purposes, but they almost never took advantage of this information. A separate study on will power versus opportunity (in a drawer in a cupboard versus out in the open) is clearly required. The tray was never returned immediately upon emptying, but usually days later, often by another shift. When first testing a ward, a learning cycle had to be achieved where the tray had to be manually retrieved, rather than automatically.

Also, the lifetimes of chocolates, from shortest to longest, include Dove miniatures, Hershey Select miniatures (gold and silver foils, with and without nuts) and Hershey miniatures (krackel, Mr. Goodbar, milk chocolate and Special Dark). For Fourth of July we had red and blue foil Doves and silver foil Hershey Kisses arranged in the three bins as red, white and blue.

By the way, the LJ/DW icon I used on this post is Kate Winslet holding a Lifesaver in her mouth -- it is, I believe, the only one of my 227 icons which features candy.

Around 11:45 the phone rang and it was the GVSU automated phone system letting Mrs. Dr. Phil know that Grand Valley was going to be closed Tuesday 7 January 2014 as well. This was not unexpected. And, as usual, we wait for Western to come to its senses. Also not unexpected.

Pictures or It Didn't Happen

We're busy working at home on this snow day. I just cleared out my voice mailbox clear back to May. (grin) No emergencies, new or old.

View northward out our sliding doors. Yeah, the back deck isn't very usable right now, but I'm not going to shovel it. The right hand window is darker due to the window screen. (Click on photo for larger.)
©2014 Dr. Philip Edward Kaldon (All Rights Reserved)

As I write this, the wind is gusting harder and at times you can barely see the trees in the next yard.

I also took some shots with my other 12mm lens, the old Sigma 12mm f8 FISHEYE. I've been using it as a fullframe fisheye lens on my DX cameras -- D1, D1X, D1H. But this time I left on the vignetting ring -- looks like a round lens hood -- part of the extension so the lens cap clears the bulbous front on the lens. Shot a couple of fullsize frames of 35mm BW400CN film on the Nikkormat FTn. The vignetting ring makes an ersatz circular fisheye, nowhere close to 180° like a 7.5mm or 8mm Fisheye-NIKKOR, but at a fraction of the cost. Funny Thing 1 -- the Nikkormat FTn is a old-style match needle manual exposure control. Except you can't see the meter needle in the finder because it's black outside the circular image. Funny Thing 2 -- Nikon was clever, and the Nikkormat, like the Nikon F meters, has an external meter display on the top deck of the camera. Setting exposure, easy.

Alas, it'll be a few days before I finish the first test roll on Wendy's Nikkormat.

For Your Holiday Enjoyment -- Part III

As promised, here's the third and final installment of three Christmas flash stories, here on Epiphany or Twelfth Night or...


And that's all for this season, so Merry Christmas and Happy New Year,

It was just around 5pm yesterday that Western Michigan University announced it was closing today. So I updated the WMU page again -- and we're off on Tuesday, too. Good call. Traffic is moving on the road okay, but it is too cold for Mrs. Dr. Phil to move enough snow in our driveway to get out. We'll need machinery. Now we can see what daylight brings...

Except for essential and emergency services, Western Michigan University will be closed for the second day Tuesday, Jan. 7, due to severe weather.

Of course I was just updating KATNISS, the Asus Windows 7 netbook with Skype -- given my condition, I am prepping to give emergency lectures over the video projector from home if I have to. Won't need it for another day.

PS -- So now the track record for the university that never closes is:

As The First Day Of Class Gets Postponed One More Day

The line above from the classic W.C. Fields movie given every time he opens the cabin door, punctuated by a handful of stage snow flung in his face. Of course this discussion immediately got Mrs. Dr. Phil talking about Maslow's Hierarchy of Needs. 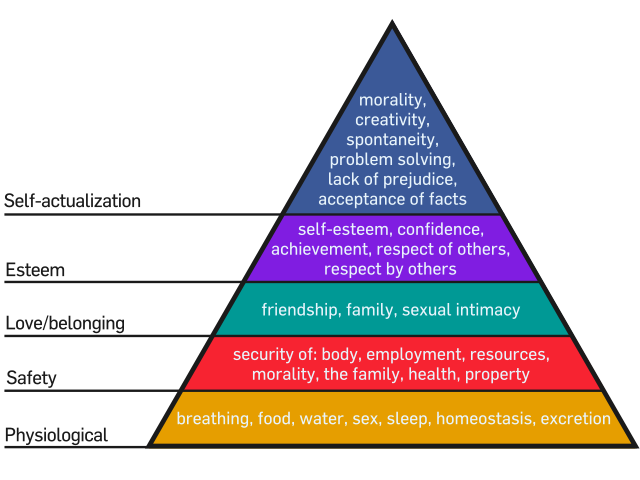 Of course I'm sure that if I spent two seconds with Google I could find multiple versions with needs such as Wi-Fi, cell signal, broadband, 50 GB of free disk space and spare anytime minutes on your cellphone plan. Minimum needs requirements, along with fast pizza delivery and a good sushi restaurant. (grin)

Temperature here at Chez Allendale is alternating between -1°F to 0.1°F, depending on which digital thermometer readout you're looking at. Of course just below zero isn't scary enough for Severe Weather Center 3 or Storm Team 8, etc., so they're all about the wind chills. For once, they should be, because the cold blows across the upper Midwest are seriously dangerous -- really bad west of Lake Michigan, bad enough on this side for people not used to seeing conditions like that.

So with the temp here around zero, the wind chill is -25°F. Kalamazoo was -12°F and wind chills of -33°F. We're supposed to see the sun on Wednesday.

Of course they had to trot out that the -12°F is "colder than the South Pole" right now, just as they've been pointing out that some of the Minnesota and Wisconsin temps are colder than Mars, without bothering to point out that it's "summer" at the South Pole. Meanwhile Kalamazoo's 45" of snow to date is 50% more than the same date last year. Again, no context with last year -- we had a lot of days bereft of snow last year -- or averages. And in the U.P. they just switch from inches to feet at some point.

Still, it's nasty out there by any metric and given that we're drifted in at the moment, I'm super glad that I don't have to try to make it out in this -- on my first day back at work. Give me a week or two, and I'll be more in the mood. But let's be sensible.